What is so special about Helvetica? 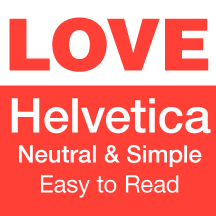 It is a not all that special. Helvetica type is a tool used very effectively by many graphic designers for decades now. Helvetica was used for many way-finding systems and this is one way it became a well known type font. It was also one of the fonts provided early on as desktop computers came into use. It has been the basis of many recognizable logos, a part of many posters too. The font Helvetica has come to have a wide and useful family of many weights, this makes it a very handy font to use and set type with and create many different looks.


But do watch the documentary movie ‘Helvetica’
Posted by tedb@tbdesign.biz at 11:50 AM